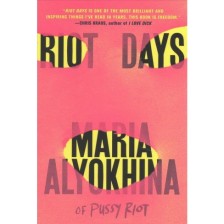 I was never an activist, I just read about them.

The first few pages of Riot Days, by Maria Alyokina, a member of Pussy Riot, felt awfully young and green to me. But then her urgent impressionistic style caught me up in the excitement, idealism and even the affectations of youth, the contagious desire to attack the evil of the world with assertions of freedom. With art.

She and her friends spend a month at a time planning and rehearsing their theatrical “actions,” the guitar music, the costumes, the timing. One day she spends five hours making a “revolutionary t-shirt.” They know their country and its history, they understand the danger they are placing themselves in, of violence, jail, re-education. And they commit to it. They can’t accept the options of inaction, or exile.

After a few successful actions, they target a church, desecrated by its fealty to money and power.  “We scramble up the stairs towards the altar, dropping our backpacks by the Holy Gates. They symbolize the gates to heaven. Women are only allowed to stand on the green walkway before the gates–the soleas–if they are cleaning women. Or brides. In Russia, there are no women priests. In Russia, there is Pussy Riot.”

The police track them down after that. Alyokhina’s son was four years old when they first came to her door. She put them off, but the next day left him watching cartoons in their apartment. She told him she’d be back soon, and locked him in. “I came back two years later.”

It’s still the “fucking gulag” out there. I’ve read about the original gulag, as much as I could, grim as it was. This is a different story, though the conditions are much the same. Women prisoners sew military uniforms twelve hours a day in dangerous and filthy conditions for $3-$20 a month, if they’re paid at all. They are stripped naked and made to do squats, guards “search” their vaginas for documents. They are often drugged with antipsychotic. “Nothing has changed since the Soviet Era. If you hear someone talking about “humane” treatment in Russian prisons, block your ears and turn away. Even better, challenge it as the lie that it is.”  Alyokhina continues to protest, by hunger strikes, by talking to human rights advocates who visit her, and by writing articles smuggled out by her lawyers. Some of that leads to real improvements for all the women prisoners: more warm clothing, better sanitation, better food, more pay. But activism and life can never be about win or lose, only about persistence. They are in a constant battle with the guards, unpredictable day to day, with loved friends who support each other, and also make life harder as they suffer or are taken away.

But Alyokhina does not dwell on her own feelings, and she does not sentimentalize. This is an artist’s rendering of a prison experience, condensed, impressionistic, and slightly surreal, punctuated with quotations and illustrated with sketches that anyone could have drawn: the church, a giraffe, the inside of a prison door. She understands how the right details, simply stated and well timed, can create powerful dramatic effects. Dough balls that seal the cracks around the broken windows in winter.  A friend’s wave from the search room, just before she is transferred to Siberia.

Alyokhina is released, but the prison is still full. ¡No pasarán! she says. “Freedom doesn’t exist unless you fight for it every day.”

This book came out in September 2017, and is still available on NetGalley, where I found it. You could probably read it in one sitting.

This site uses Akismet to reduce spam. Learn how your comment data is processed.

Totally in love with this thing now
The industrial machines have a finger guard! Modern technology.
From the teenager's birthday card to her dad last night